After winning the Academy Award for Best Picture for The Hurt Locker in 2010, Kathryn Bigelow and writer Mark Boal are back with a film about the United States’ ten year hunt for Osama bin Laden. Though we already know the outcome, Boal and Bigelow manage to make the film riveting, suspenseful, and intense throughout, similar to the way Ben Affleck thrilled audiences with his own political period piece, Argo, earlier this year. Based on firsthand accounts from people who were involved at every step of the real story, Boal uses his background as an investigative journalist to take us inside the search for the world’s most dangerous man and, though a bit of dramatic license is occasionally taken, show how finding him came down to the fortitude of a single woman.

Jessica Chastain plays Maya, a CIA agent recruited out of high school assigned to track down bin Laden. She meets up with Dan (Jason Clarke), a no-nonsense soldier who spends his days torturing detainees for information. In the early minutes of the movie, Dan makes Maya an accomplice in this behavior and though she clearly doesn’t enjoy it, she realizes that this dirty work done behind closed doors is an integral part of finding their target. It’s a star-making performance for Clarke, who shined on the short-lived FOX TV series “The Chicago Code” and as one of the Bondurant brothers in this year’s bootlegging drama Lawless. Dan seems to have taken lessons at the Vic Mackey School of Torture, showing the same sort of ruthlessness that Michael Chiklis displayed as the hard-nosed enforcer of FX’s “The Shield.”

The film introduces us to the core group dedicated to tracking bin Laden with Maya and skips through the years detailing various dead ends and red herrings before she finally stumbles upon a single name: Abu Ahmed. He’s a courier for the Al-Qaeda mastermind, and Maya thinks that if she finds Ahmed, she’ll find bin Laden. But pressure from the government higher ups and random bombings around the world (some hitting closer to home than she’d like) leave everyone scrambling to keep up, and only Maya is left thinking if they knock over this key domino, all the others will fall around it. It’s as if she’s caught in a season of “The Wire,” filled with all of the ups and downs of a long term investigation told briskly in under three hours. Where Bigelow and Boal kept us at arm’s length through the eyes of the unhinged protagonist in The Hurt Locker, they totally pull the audience into the story here, and Chastain’s powerful lead performance steers the story toward its inevitable conclusion (while at the same time revealing how scarily close that outcome came to never happening at all).

I’d say this role is a star-making performance for Chastain as well, but after her amazing 2011 (in which she starred in seven theatrical films in a single year), the truth is she’s already a star. Her work here ranks among her finest performances so far, as she exudes dedication and strong-willed resolve to follow her gut even when everyone turns against her. I could spend an entire separate review heaping praise on the amazing supporting cast, but with names like Mark Strong, Joel Edgerton, Chris Pratt, Kyle Chandler, Edgar Ramirez, Mark Duplass, James Gandolfini, Harold Perrineau, and Jennifer Ehle in the mix, there are too many people in that list that I love, and it would take far too long.

I’ve heard some complaints in the critical community deriding the choice to open the film with a 9/11 callback, with the thrust of these complaints being along the lines of: “We get it. We know how bad bin Laden was and how terrible 9/11 was. Why does that need to be in the movie?” But I’d like to defend the choice to open the film with that audio montage. For those of us who lived through 9/11, we all bring our own memories and experiences into the theater when we sit down to watch Zero Dark Thirty. By keeping the screen black and just playing audio, it allows us to visualize our own memories about that terrible day and puts us back in that mindset to understand the villain that we’re about to spend the next two and a half hours chasing. But also keep in mind that this film will outlive us all, and for audiences in the next generation who don’t have vivid recollections of where they were, what they were doing, and what they saw that day, this montage sets the stage for those viewers; by using real voices on those phone calls and not just actors, it gives the film a sense of importance separate from the simple “based on a true story” that your average sports drama might receive.

The final scene, an almost real-time retelling of SEAL Team Six breaking into bin Laden’s Pakistani fortress and actually doing the deed, plays at times like a haunted house film. The general public still doesn’t know much about what exactly happened inside that compound, so Bigelow and Boal insert a few jump scares here and there (nothing too egregious) and take that opportunity to give the audience a couple of surprises in a film in which we otherwise essentially know how everything else plays out. It’s shot in night vision and evokes the same kind of disconnected intensity of The Hurt Locker, and unlike Quentin Tarantino’s Inglourious Basterds – which let audiences get collective catharsis through the revisionist history of watching Hitler absolutely annihilated by machine gun fire – Zero Dark Thirty barely shows its villain during his assassination. Since we spend the whole movie looking at the search for bin Laden through Maya’s eyes, the film’s real money shot isn’t a bullet to his head; it’s seeing her identifying the body and watching the weight lifted from her shoulders in the movie’s closing moments.

Even though I really liked Zero Dark Thirty, I’m hoping Bigelow steps away from war movies for a little while after two back-to-back efforts in that genre and continues to stretch her directing muscles elsewhere. The calculated way in which she stages that final raid is technically impressive, but it lacks the soul that the rest of the movie has. She’s at her best when dealing with characters, not events. But she’s having quite the run late in her career, and with ZDT being a frontrunner for Best Picture at the upcoming Academy Awards, two wins could cement her as the voice of a generation chronicling American forces’ activities overseas. But even if she spends the rest of her life making war movies, she’ll always be the director of Point Break to me. Which, in case that wasn’t clear, is totally a good thing. Until next time…

If you’re the type of moviegoer who enjoys films that are poorly made, terribly acted, only semi-competent in executing action sequences, but ones with tons of charm and enthusiasm, Miami Connection just might be your new favorite movie. Made in 1987 and promptly forgotten, someone at Drafthouse Films bought a copy of it using Ebay and is now releasing it for the world to see. The plot involves a synth-rock band named Dragon Sound full of Tae Kwan Do black belts who battle drug lords and a gang of motorcycle-riding ninjas to stop the cocaine trade in Orlando. And the final product totally lives up to that ridiculous premise.

Miami Connection is the brainchild of co-writer, co-director, producer, and star Y.K. Kim, who makes a living off screen as a martial arts grandmaster, inspirational speaker, and dojo owner in Orlando. On screen he plays Mark, an easygoing backup guitarist for Orlando’s own Dragon Sound who is far better at martial arts than he is at playing the guitar. John (Vincent Hirsch), the lanky bass player, is in love with the group’s female singer Jane (Kathy Collier), and all goes well until Jane’s jealous brother Jeff (William Eagle) – known for hanging with a rough crowd – gets involved and starts muscling John out of the picture. Unbeknownst to Dragon Sound, Jeff is involved with a gang of cocaine dealing ninjas based in Miami, and when they team with the scorned band that Dragon Sound ousted at the club where they play their music…you can smell the street fights already.

The action bounces back and forth between being totally sanitized and gruesomely violent with no warning and zero consistency, which actually becomes sort of fun after you get used to it. You never know whether someone is going to get kicked in the chest or beheaded, and with either one a possibility at all times, it makes enduring some of the more questionable elements of these scenes (things like lighting, camera placement, and editing) a bit easier to swallow. The settings for action scenes also vary drastically, ranging from some sort of low-lying marshland to a railroad station to what appeared to be a combination of a castle and a junkyard. As someone who lived in Orlando for a year in the 2000s, I assure you that no such place still exists (if it ever did in the first place).

But in spite of these flaws (or perhaps because of them), no other movie so earnestly wears its heart on its sleeve, and the genuine affection for the filmmaking shines through even though it certainly doesn’t live up to generalized standards of being a “good” movie. (That’s a whole separate topic covered by Matt Singer at Criticwire.) From the lyrics of the band’s amazingly-terrible-yet-catchy-as-hell songs (things like “Tae Kwon Do is our way of life”) to the wise old restaurant owner character who tells the group the true meaning of martial arts, it’s clear that Kim was using this film as a vehicle for spreading the gospel of his art. Miami Connection is the rare action movie with a mission statement, and as cheesy as it gets at times (OK, the entire time), there’s just something about it where you can’t help but smile. 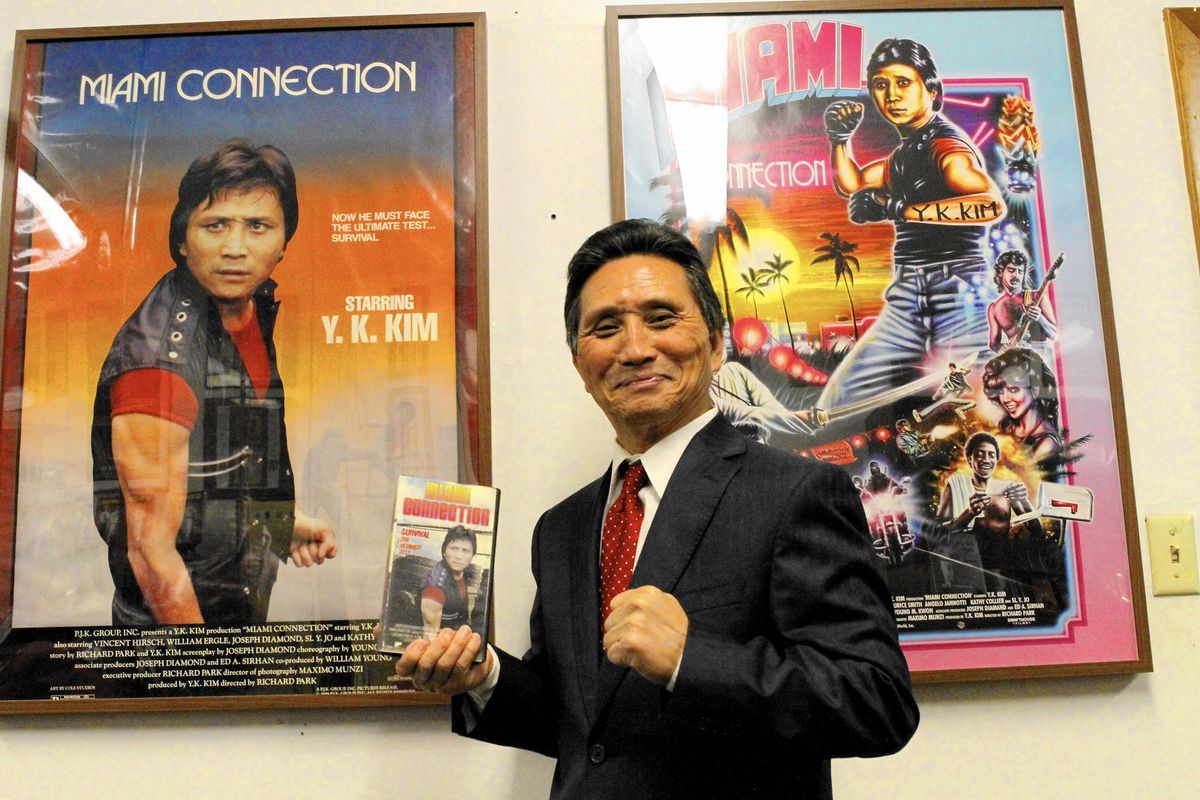 The acting is excruciatingly bad and the over-dubbed voices are godawful, reminiscent of the director’s work on a film called L.A. Streetfighter from a couple of years prior. The plot doesn’t even try to make sense much of the time, and extended sequences of the band cruising the beach trying to pick up chicks or practicing martial arts on the University of Central Florida campus seem to be just things that these actors would normally be doing anyway, regardless of whether a camera was there to see it or not. (Only two members of the cast were actually professional martial artists, and the rest were students at Kim’s school.)

The movie raises so many more questions than it answers, and if you’re open to films like these, you’ll likely have a blast with your friends laughing about the inconsistencies and questioning character motivations. It’s a ludicrous film, but the unadulterated passion that went into making it somehow takes it to another level. It’s not nearly as audacious as Buckeroo Bonzai Across the 8th Dimension, another film that featured the lead characters in an 1980s rock band, but it’s not trying to be; the only think Y.K. Kim wants the audience to get from this is that maybe, just maybe, Tae Kwan Do could be the answer to life’s problems. If you’re looking for something fun and insane to watch, Miami Connection could be the answer to yours. Until next time…